Home / Uncategorized / They tried to make me go to re ... 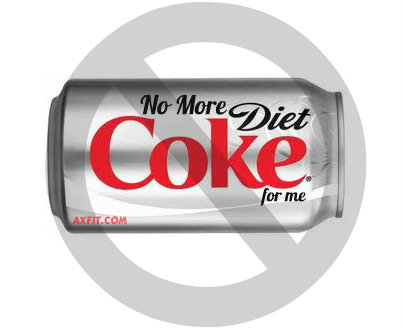 Addiction is a powerful thing. I never really understood withdrawal until I went personally through detox. It was three days of pure hell. I had massive headaches, stomach cramps and extreme fatigue. I was literally bed ridden to the point that my mother had to take my girls for an afternoon so I could sleep it off. I was in fact, an addict.

I can’t really remember when my addiction began. I am guessing it’s been 20 or so years. At first it was just a casual thing, once or twice a week. It quickly 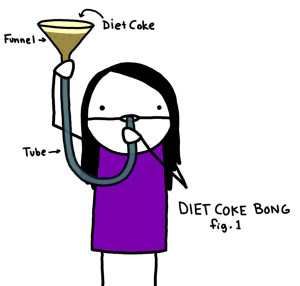 became every day and then several times a day. I would quit on occasion for a day or so, but it kept calling me back for one more taste. My name is Angela, and I am a recovering Diet Coke Addict .

I am completely serious when I tell you that I would become abnormally excited for ‘pop season’ to start at McDonald’s. Pop season starts at the beginning of May and continues throughout the summer. This meant that starting May 1st, I could get a PAIL of Diet Coke for the low, low price of $1.13 (including HST). Some days, I would wheel through that drive through twice. This means, that not including any cans of the devil’s liquid I would drink at home; I was ingesting almost 1.5 liters of Diet Coke, DAILY.

After I began working with a nutritionist, she was quick to tell me that Diet Coke was not something I should be enjoying, ever. Void of sugar and calories it still cannot be considered a ‘healthy choice’. Aspartame was doing so many things to my body that I didn’t even realize.

“Aspartame accounts for over 75 percent of the adverse reactions to food additives reported to the FDA. Many of these reactions are very serious including seizures and death. A few of the 90 different documented symptoms listed in the report as being caused by aspartame include: Headaches/migraines, dizziness, seizures, nausea, numbness, muscle spasms, weight gain, rashes, depression, fatigue, irritability, tachycardia, insomnia, vision problems, hearing loss, heart palpitations, breathing difficulties, anxiety attacks, slurred speech, loss of taste, tinnitus, vertigo, memory loss, and joint pain.” 1 (Click here to read the rest of this article)

So many people ask if I still drink pop. Occasionally I will. I try to only have a sip of my husband’s pop to get rid of the cravings (I won’t lie, I LOVE pop/carbonation and beer isn’t always an appropriate option 🙂 ). It isn’t only the sugar or aspartame that makes it so unhealthy. (In my opinion, aspartame is much worse than occasional, small doses of sugar.) 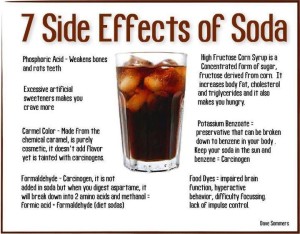 I was so used to counting points or calories that those numbers mattered more to me than what I was eating or drinking could actually do to my body. To me, if there were no calories it couldn’t hurt, or so I told myself. I am an intelligent person, and deep down I knew that it couldn’t be ‘good’ for me, but as long as it wasn’t ‘fattening’ it didn’t really matter.

The thing is, Diet Coke WAS making me fatter. Aspartame is not only the root of many medical evils, but it made me crave other junk! On July 17th, 2012 I had my last pail of Diet Coke and I have never looked back. As a matter of fact, since that day I have not had any artificial sweetener whatsoever. I was heavily addicted and never want to go back to that. Seven months is a long time and I just hope that with my newly adopted habits, I am able to reverse some of the damage I caused to my system by drinking this poison. Since cutting this out of my diet, and eating foods that are more nutrient dense and not processed, I do not have the cravings I had before. My bouts with gastrointestinal issues are now non-existent. I also have less headaches and more energy. (I do realize the energy can be contributed to my fitness level as well.)

By no means am I perfect. I still have cravings for things, and sometimes make choices that may not be considered ideal. I am a firm believer that treats are allowed in moderation, and can be part of a healthy lifestyle (My nutritionist supports this too, fancy that!). I do not however, want to get back into this specific habit because it has a snowball effect for me. I also do not eat or drink anything with sucralose. I have been approached on numerous occasions to try products containing this alternate sugar substitute. Did you know that sucralose can have the following effects?

Wait, what the WHAT?? If these are the possible side effects, then WHY are companies promoting weight loss products with this ingredient in it, including one of the leading health/fitness crazes sweeping North America and beyond? This is something that completely baffles my mind. There are healthier, natural alternatives to add sweetness, with a few more calories but significant nutritional and health benefits.

What I have learned is that yes, everything is OK in moderation, even sugar. What is not OK for me, is using addictive chemicals like artificial sweeteners that are not only unhealthy, but counterproductive to what I am trying to achieve. I need to remind myself that just because something is void of calories, it does not mean it is void of nutritional disaster. I know that if I have the occasional Diet Coke it will turn into a couple a week and then right back in the same old habit. Pop season is right around the corner and I plan to be strong. My name is Angela and I am a Diet Coke addict. I have been Diet Coke free for 7 months…and counting.